Learning Portuguese as a second language, like learning any language, can be challenging. However, if one dedicates their time and efforts, and is guided by a gifted instructor, the task is not impossible.

Portuguese is part of the Romance Language family tree, and speakers of either Spanish, French or Italian may comprehend some of it rather quickly, especially in written form. There are also plenty of quick and easy “set phrases” in Portuguese that will allow even the slowest of learners to get around and communicate with native speakers in no time.

Of course, gaining fluency takes more work. Conjugations are not always easy to remember – I still have to think carefully before starting a phrase in the past tense. Regional and national accents and vocabulary can also be a challenge – Portuguese in Brazil is not quite like Brazil in Portugal, for example. A move from one state or country to the next may make one feel as if they are listening to a whole new language. Yet, persistence pays off.

An example of this persistence is in ESPN´s Dalen Cuff. His first trip to Brazil was in 2009 and he was enamored with the country. Dalen realized, after his visit for the 2014 World Cup, that he really wanted to learn Portuguese as a second language and so set out to do so.

What began as a desire to speak simply for the love of Brazil turned into a desire to speak so as to better do his job. He was slated to work in Rio de Janeiro for the 2016 Olympics and wanted to be able to interview the Brazilian athletes in Portuguese. He had two years to get ready for this and was able to accomplish his goal. His tale is one of hard work, dedication, and finding the right instructor – in this case, Hello Portuguese’s own Carmen Moura.

Mr. Cuff admits that the language is not easy and that he still learns new things every day. He does have some general tips and personal insight for those who are in the process of studying Portuguese as a second language.

How to learn Portuguese as a second language?

First, he says that when learning Portuguese, it was important that he had a grammar base while at the same time being able to have conversation and cultural exchange classes with his instructor. He realized that the more he studied using real world examples of things that interested him, the easier it was to retain information.

For example, if you are into movies and music, but use The Economist as a study guide, you may take twice as long to pick up on the language as someone who is reading articles out of a Rolling Stone magazine. Build your learning experience on your own real life experience – it makes the learning process much more enjoyable and constructive.

He also stresses that it is important to find the right instructor. Search for someone who comes to classes prepared and ready to show you something new. Make sure they correct you and give you constructive feedback. It’s also key that your instructor allows you to talk in class and train what you are learning. He found this person in Carmen Moura, and it really paid off.

Another point to consider before you begin learning any language is figuring out why exactly you are learning it. This will help you to choose the right material and it will also help define the pace that you may want to take.

Dalen wanted to be ready for the 2016 Olympics. Although his initial drive to learn Portuguese as a second language was on a merely personal level, learning the language also became a professional goal. This self-awareness undoubtedly helped structure the path he took with his classes and allowed for him to speak at a very high level in short time.

Some further advice that Mr. Cuff offers is related to his personal difficulties with Portuguese.

He confesses that the structure of the language, as well as the difference between the verbs “estar” and “ser” (variations on the usage of the verb “to be”), still confound him a bit. He recommends watching a lot of Portuguese-language shows, either on television or on Netflix, so as to train listening for these things.

Most of all, Dalen tells people who are learning the language to get out there and communicate with native speakers in the real world. If one is learning outside of a Portuguese-speaking country, this is not always easy, and he does mention the free language exchange site italki.com as a good way to get around this. However, if one is learning the language inside of its country of origin, they should stretch themselves as much as possible and use what they know with the native population.

Finally, Mr. Cuff stresses the importance of setting time apart to learn. This may be the biggest challenge of all considering how busy our lives can be. But if one dedicates themselves to the mission, it is not an impossible one.

The main message is that the more one can immerse themselves in Portuguese, by any means, and supplement one’s learning outside of the formal classroom setting, the better they will invariably get at it.

So set your goals and keep up your studies. Learning Portuguese as a second language can be quite an adventure, but one worth taking. As Dalen states quite plainly, “If I could learn the language, anyone can.”

A full video of Dalen Cuff’s testimonial on learning Portuguese as a second language can be found below.

If you also want to learn Portuguese as a second language, check out my Portuguese courses in Brazil. Access the link https://helloportuguese.com/our-courses/ 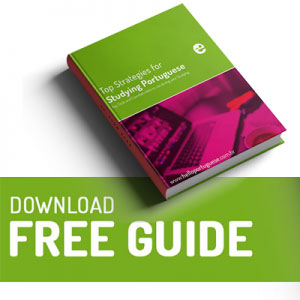 Enter Your email to receive my ebook

+ a  free minicourse for beginners

You have Successfully Subscribed!